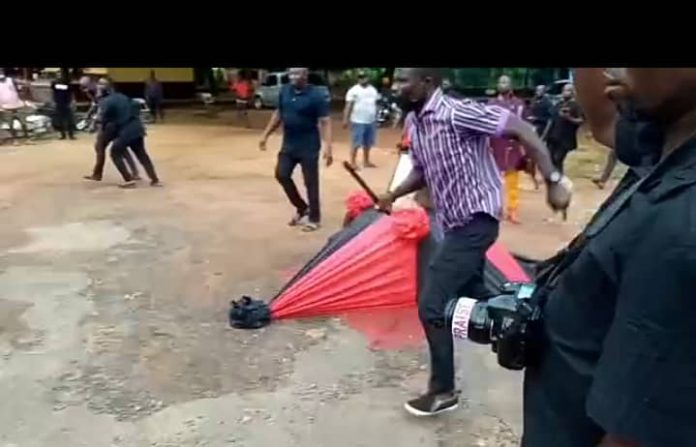 One of the drivers of the Member of Parliament (MP) for Suhum, who is alleged to have inflicted wounds on the head of a Party Communicator at a funeral in Suhum last Saturday, has been arrested.

The suspect, Kofi Agyei, popularly known as Jamalo reported himself to the Suhum Police Command yesterday afternoon, after pressure was mounted on the MP, Kwadjo Asante and Executives of the Party in the Constituency to produce him as the main suspect.

Jamalo was immediately whisked to the Eastern Regional Police Headquarters in Koforidua, where he wrote his caution statement.

He allegedly inflicted wounds with a metallic object on the forehead of the NPP’s Lower West Akyem Communications Officer, Bernard Kwasi Amoani and initially went into hiding after the incident.

The Eastern Regional Police Command confirmed the incident and disclosed that the matter is being investigated for possible prosecution, while the metallic object is being kept as an exhibit.

Earlier, one of the aides of the MP was also arrested for allegedly slapping the Constituency Secretary, Ernest Lartey, during the violence at the funeral when he attempted to separate the fight.

The suspect was later granted bail after writing his caution statement at the Suhum Police Station.

Meanwhile, Jamalo was this morning arraigned before the Cocoase District Court ‘B’ in Koforidua and was charged with causing harm with an offensive weapon, contrary to Section 70 of the Criminal Offences Act, 1960 (Act 29).

His Lawyers prayed the Court to grant him bail, pending trial but it was turned down.

The case has been adjourned to Tuesday, September 7 for ruling on the bail application.