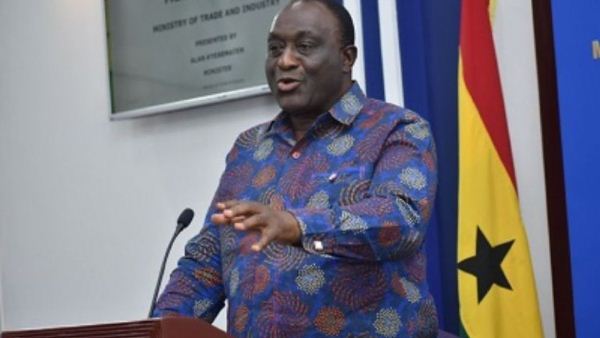 Minister of Trade and Industry, Alan Kyeremateng has commiserated with victims of the Makola market fire yesterday and has assured them of government’s support.

He said the incessant fire outbreaks in markets are not only limited to Accra but other major cities in the country.

The Trades Minister announced that authorities are working assiduously to ascertain the cause of the fire.

Briefing the media in Accra, Mr. Kyeremanteng said safety measures will be put in place to prevent the recurrence of fire outbreaks in the country.

Just a day after the Makola fire Outbreak, victims are still trying to salvage their properties and wares. A visit by GBC NEWS to the area saw smoke still billowing from the building. The affected traders were still in a state of shock.

Pockets of refuse were piled up along the shoulders of the roads around the area. Some traders were also seen trying to retrieve remains of their items which were partly destroyed by the fires.

Minister of Trade and Industry, Alan Kyeremanteng, said government plans to find a permanent solution to the recurring fire outbreaks in the various business centres.

Mayor of Accra, Adjei Sowah, said the Assembly will look into the previous report on fire incidents and acts on the recommendations to deal with the problem.

Meanwhile, GUTA President, Dr. Joseph Obeng is calling on government to submit previous forensic report on the recent fire outbreaks so that a committee comprising all stakeholders will be constituted to find a permanent solution to the problem.

The Ghana National Fire Service says a total of 5,966 fire outbreaks were recorded in Ghana between January and December 21, 2020. The Service said the number of outbreaks recorded represents a four-point nine percent increase over the previous years.