Two months after eviction, some Onion sellers are yet to fully re-locate to Adjen Kotoku 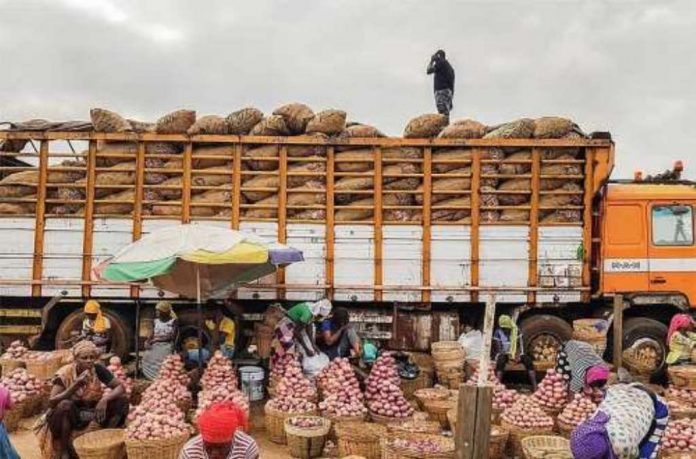 A number of traders at Agbogbloshie say they are unable to relocate to Adjen Kotoko as directed by the Greater Accra Regional Minister following their eviction from the market On July 1, 2021.

This is because their customers have refused to transact business at Adjen Kotoku which is their new location and prefer the Agbogbloshie market. Others claim they never received any compensation provided by the government to assist them to relocate.

More than 2 months on, following the relocation, the land remains bare, with debris from the relocation still evident as smoke continues to bellow in parts of the market. Heaps of refuse have been gathered on the shoulders of the main road that goes through what used to be the Headquarters for buying and selling of yam and onions in Accra.

Although the majority of the traders have relocated to Adjen Kotoku, a number of them say they are unable to relocate for several reasons. A Yam Seller who had displayed her goods under a yellow umbrella near the GRA Agbogbloshie small taxpayer office told GBC NEWS that she is unable to relocate for two reasons.

“Some of us never heard of the compensation and so I did not receive any money. We cannot move because business is not good at Adjen Kotoku, but it’s better here because all our customers are here. When some of us went to Adjen Kotoku, the Onion Sellers did not allow us to sell, they said the market is for Onion Sellers only”. The Yam Seller disclosed.

Another seller who displayed onions close by told GBC News reasons for why he had not relocated from Agbogbloshie.

“Because my customers are in Accra, I cannot go and sell at Adjen Kotoku. What do we do if my customer calls to let me know when they want some onions, then we meet here at Agbogbloshie and business because Adjen Kotoku is too far? ”, the Onion Seller stated.

The lady he sold collaborated his story.

“I want to buy onions in small quantities so I cannot go all the way to Adjen Kotoku. He (the onion seller) even added his transportation fare to the price of the onion which has made it too expensive.”

From all indications, the traders who are still selling at the Agbogbloshie market do not have any immediate intentions to relocate.

It behoves upon the authorities to step in and handle the situation before the traders who relocated to Adjen Kotoko attempt to move back to Agbogbloshie.