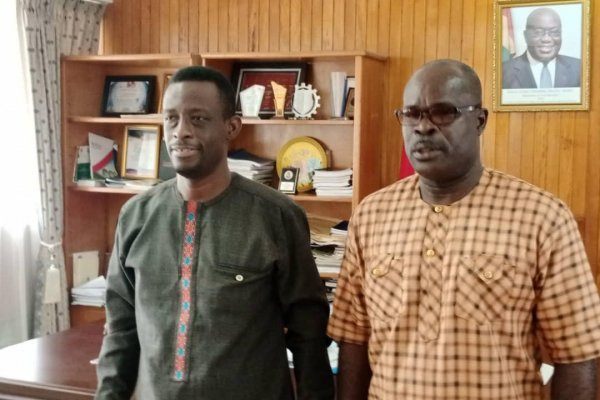 The Western Regional Minister, Kwabena Okyere Darko-Mensah says he is committed to building a robust business environment in the Western Region to become a model Region for the Country.

He added that the development of various models including enterprising the Region was therefore key to the vision adding, ” The RCC’s resolve is to make the Western Region the model Region of Ghana and this cannot be realized if entrepreneurial governance is not entertained”.

The Minister was of the firm believe that the GBC should be at the forefront of such a vision and drive it and conscientize the people of the Region to buy into the concept  and do the right things to realize it.

As a Regional station of the Ghana Broadcasting Corporation, “should drive this agenda well to better position the region for business, growth and the total development”

He admitted to the challenges facing Corporation, “your issues are not new to me but necessary steps are being taken to address them.”

Mr. Alfred Osmond Hughes expressed gratitude for the warm reception and congratulated the Minister for his Reappointment as the Regional Minister.

He alluded to the conducive business environment under his tenure and pledged the station’s commitment to grow and sustain it.

The Director said though GBC remained a public broadcaster, there has now the need to change some of its activities to generate revenue.

He added that at a management conference held recently, there has been the need to transform GBC, relax Bureaucracy and introduce more Business approaches to sustain it.

Mr. Hughes promised to support the work of the RCC by ensuring that their activities are sold to the public through news and other talk shows to help sell it ideas and works.

The GBC Regional Director said, “I don’t know the last time you made it up the steep hill of our corporation…now it is riddled with a lot of pot holes which are gradually becoming manholes…we pray you to reciprocate and see things for yourself.”

Give your children the best protection- Department of Social Welfare